2018 present from the Universe to JC – a trip to Boulder, Colorado to meet Ken Cohen ✔

The universe can conjure up marvellous surprises for you, – if you let it, by releasing expectations of what the future should hold. At any point of time, there are infinite possibilities.  Some of the most memorable surprises the universe has presented me, totally out of the blue, include;

Generally, when these situations came up, I just said yes, prepared, turned up, and hoped for the best…. Awe and gratitude at the wondrous way the universe works.

This year the universe delivered another biggie surprise gift- a trip to Boulder, Colorado to meet Ken Cohen.  Ken Cohen has been training in martial arts qigong and healing since he was 15 and is the author of  “The Way of Qigong”.

I have wanted to visit Boulder, Colorado since 2002 when I found out that Ken lives there. Later, good friends from London times moved there, providing me even more cause to check out why Boulder attracts such marvellous people.  However, I had never actioned the wish, as there were other travel priorities, with children, family to visit generally in EU and China, and financial considerations.

So imagine my awe and surprise when my partner decided to use up the frequent flyer points he had been saving up for three years to book us flights to Europe and Boulder, Colorado.  Work contacts had simply presented themselves in Boulder, Colorado – and so, I went with him, happily.

Ken Cohen graciously invited me to join in a Qigong Teacher Training session on a Monday afternoon, despite having a waiting list and being booked out until September 2019.  This blog is for me to share the  experience and the learnings with you.

The appointment was 4 pm at a little cabin in the mountains. My partner was expecting a guru – but like a true Taoist who lives simply, Ken keeps a low profile. In fact as we backed the car into the nettles  a neighour in a beanie was trying to work out what the sudden influx of visitors was there for.

Ken invited us into his study, graciously showed us around his library of original language I Ching and Taoist and Qigong books, many of which are no longer in print. He has read all of them, and understands them, which  is why I hold Ken in such high regard.  As a US native he has incredible mastery of the Classical Chinese language.  Classical Chinese is incredibly hard to decipher, as punctuation was not invented then, so it was unknown where a sentence starts or stops.  My first efforts at university to read Classical Chines 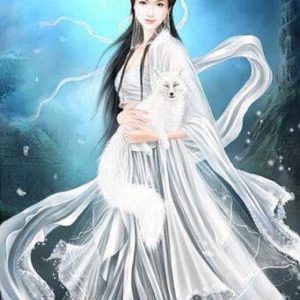 e involved translating a story about a fox fairy.

The translation attempt took us between 3 – 5 hours as each word had to be looked up in a dictionary, and then there was a choice of 3 -5 meanings.  The next day at class, I heard 30 different versions of what the story might have been, and none of these were correct. That is when I lost interest in studying classical Chinese.

Not so Ken Cohen, who has studied the original source texts, can quote them line by line and deeply understands the meaning.  Ken has done a great service to the West by studying and translating the Qigong classics concepts and philosophy.  Ken Cohen has also collaborated with scholars of Eastern philosophy, including Alan Watts and universities to study the phenomenon of Qi. Here is a recent interview with Ken.

Ken took a group of his teacher trainees, Tom and myself through three full moon meditations and generously shared anecdotes of his travels to Iceland to study the fairy folk, Taiwan to source tea and graduation challenges with a Zulu healer.  Ken graciously made tea for us and plied us with moon cakes. We met his wife,  a Mexican healer.  The whole evening my heart was full and my eyes were shining. I felt like a kid again that listens with awe to adults who have been on marvellous adventures in the big wide world.

So as a Qigong practitioner, what were my learnings from meeting this Master?

In our moon meditation Ken Cohen took us to contemplate the moon, then know;

“ Even as we look at the moon, we are the moon too”

For the first time, it made sense to me, not on the theoretical level, but in my heart, I knew it to be true. 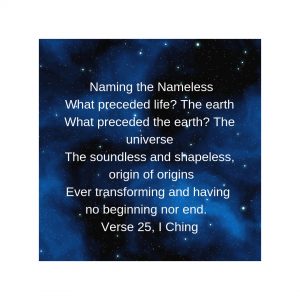 When I was 20 and studying Chinese, I could not get my head around the word 也 pronounced ‘Ye”. It means ‘also’ but it can also mean “is equal to”. So A也 B means A equals B.

I grappled with this unsuccessfully.  How can A equal B, when clearly they are different? I had been trained to discriminate and differentiate between facts; oranges are not equal to apples, period.  However with quantum physics, I began to understand that a particle could express itself as either A or B not if you looked at it as existing in the same time frame, but rather as alternate co-existing possibilities; i.e. a particle comes from the quantum field – infinite potential, and it can express itself as either A or B in the finite realm.

What probably helps is to look at it as a series of algebra equations. For example if  X=Y+3 and at the same time 3-2Z = Y then we solve what X, Y and Z are, theoretically. So come on this journey with me;

If it still does not compute for you, then look at it as the “I” referring to your Consciousness and Spirit, rather than your physical manifestation and presence.  Remember you are an infinite being, currently in a finite experience as a human.

This is a key concept in Qigong – humans are termed as linking Heaven and Earth, or in modern terms, as straddling the quantum realm and the manifested one. The forces that create and shape mountains are also within you, and surround you.  Understanding this in a tangible way is a key to moving to the next level.  Practice Qigong to nourish and cultivate the Force, increase its potency and allow its unfoldment through you.

If you are interested in Qigong classes, refer here for more information.